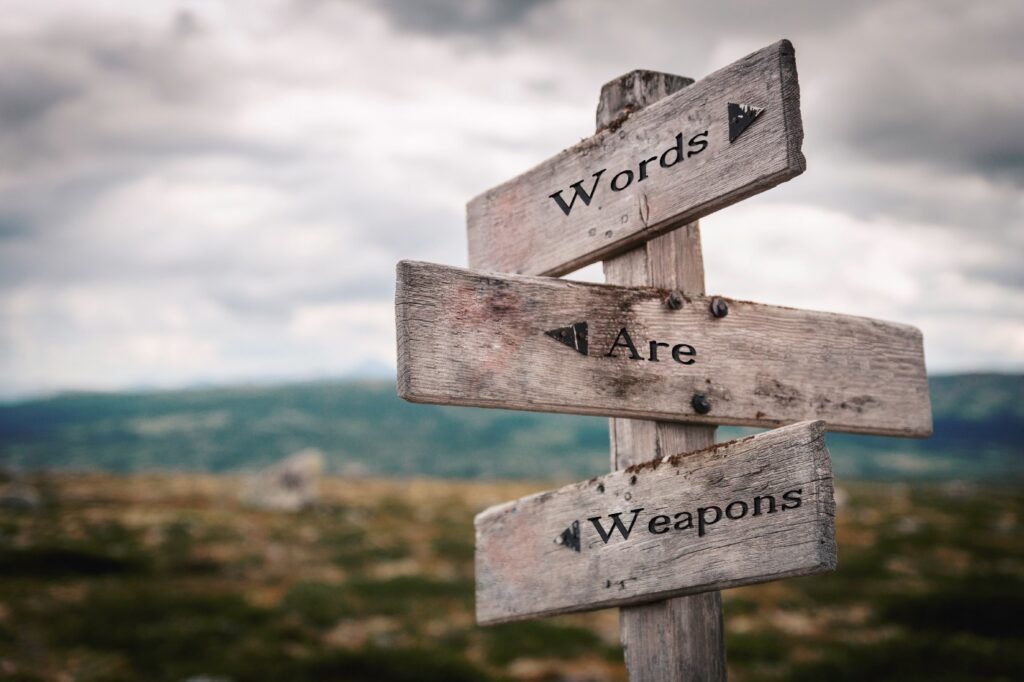 I recently watched the documentary film “Becoming” about former First Lady Michelle Obama. She says something toward the end of the film that struck me:

“When you’re president of the United States, words matter. You can start wars, you can crash economies. There’s too much power to be that careless.”

It seems to me that words matter even when you’re NOT president of the United States.

Words can be powerful tools of healing or weapons of destruction. Words can break down a person’s spirit, crush a child’s dreams, or deflate a woman’s sense of self. I don’t believe that is the intention of most people. I believe that most of us want to inspire hope, bolster self-esteem, and create a better future. We do not do that by using words that divide, incite anger and violence, and diminish others.

Words matter. Especially when they are delivered by someone you love. Like a sharp knife, insults and criticism which attack not only how you act but who you are, cut through your self-esteem and leave you silently bleeding. Domestic violence victims will tell you that an abuser is stealthy in his use of these weapons. The words sneak up on you and take you by surprise. “Wait, did he just say that I’m dumb and ugly? My Prince Charming?” “No”, he says, “I was joking.” But he’s not. He will say these words and worse again, and again, and again. Not all at once but over time. Until maybe you start to believe his words are true.

Words matter. When you’re in a relationship with an abuser, those words can destroy your sense of self and create divisions that isolate you from your friends and family. Words are the weapons of emotional abuse that create a place for violence. These words break down your sense of who you are. You begin to disintegrate from the inside out. And when the physical abuse finally happens, a part of you believes that it is your fault. For being dumb and ugly… You’re embarrassed and so sure that you are to blame that you tell no one. You hide your bruises. You don’t want to find out that he’s right: that no one would believe you or care anyway.

Words that tell you that you are stupid, that no one cares about you, that the reality you’ve experienced isn’t real, that your history never happened. These words can disorient you and make you doubt who you are and what you’ve experienced. And most disturbingly, they can leave you indebted and dependent on the very person who says them. That is a person who has discovered the power of words to tear down others and bolster his own self.

That is a dangerous person.

We know that intimate partner homicide is on the rise in the United States. In 2017, 2237 people were killed by intimate partners, that number was up 19% from 2014 (Fridel & Fox, 2019). The data tells us that 1 in 4 women will be physically abused by an intimate partner in her lifetime. 1 in 4 women! Think about that. Whether or not we acknowledge it, we all know victims of domestic violence.

We also know that abusive relationships don’t start out that way. In my documentary film, Finding Jenn’s Voice, the survivors of attempted homicide with whom I spoke described their abusers as initially ‘charming’ and ‘romantic’. They were ‘swept off their feet’ and made to feel like they were the center of his universe. If you’ve ever experienced that kind of romantic love, you know how addictive that feeling can be. We are hardwired as humans to want to be wanted. Being placed on someone else’s pedestal — that’s pretty heady stuff. It’s also a long fall when that pedestal is kicked out from under you. You land hard on a rocky surface, disoriented and confused. That feeling is exactly what an abused woman experiences when her Prince Charming turns out to be the villain in the fairytale. And guess what? Not one punch has been thrown and no bones are broken…yet.

I’m here to tell you that there’s someone in your world, maybe your sister, your neighbor, your coworker or your friend who needs to hear different words.

Tell her it’s not her fault.

Tell her she deserves better.

Tell her she’s not alone.

She may not believe or even hear you the first, second or third time you say these words. But somewhere inside, your words can nourish her parched sense of self, and help her heal — from the inside out. Eventually, she’ll hear you and it just might save her life.

Because your words matter.

Your words may not start wars or crash economies, but they can be the seeds of hope and healing for her, for ourselves and for our world.